If you’re planning a trip to Israel, the Dead Sea is probably somewhere on your itinerary. The super salty lake lies between Israel and Jordan and draws in tourists from around the world for numerous reasons. Whether it’s to float on its idyllic blue waters or to test out the healing properties of the natural muds, you might find the Dead Sea to be a mystical phenomenon, but really—the actual science behind it is much more intriguing to behold.

Let’s start with a few Dead Sea facts you should know.

Why is it called the Dead Sea?

Despite its name, the Dead Sea is actually not a sea, but a hypersaline lake. Why is it called the Dead Sea? Because no life forms (plants or living creatures) could survive in its waters, although it does contain microbial life.

How am I able to float?

Due to the high salinity of the Dead Sea, the salt and minerals are most concentrated at the bottom of the lake. Because a person’s body weight is lighter than the density of the saltwater in the Dead Sea, this increases your buoyancy. The further you wade into the sea, the more you’ll experience the feeling of being pushed up or floating, due to the natural buoyancy. Essentially, the deeper the water, the more you’ll float, which makes swimming in the Dead Sea impossible.

Does the Dead Sea really have healing properties?

Going back to Biblical times, the Dead Sea was known as a place of healing. The minerals in the water include magnesium, sodium, and bromide, and their mineral properties are known for providing relief from chronic conditions, including arthritis and osteoporosis, as well as reducing inflammation and stress by increasing blood circulation.  Dead Sea sand and mud is also used to help with skin conditions such as psoriasis, skin allergies, and atopic dermatitis.

UV radiation is reduced at the Dead Sea because of the unique climate conditions. As it's the lowest point on Earth, the extra layers of atmosphere help to absorb more of the radiation. Combine an extra-large dose of Vitamin D with the healing benefits of the Dead Sea minerals, and it’s understandable why so many visitors choose to spend a few days to a few weeks at the Dead Sea.

So now that you got some of the science behind it, here are a few of the dos and don’ts you should keep in mind when visiting the Dead Sea.

Acne? Dead skin? Just want the benefits of a luxury skin treatment? After you’ve had some time to float on the Dead Sea, make sure you lather up your skin with some of the natural mud. After applying the mud all over your face and body, rinse it off at the showers (don’t use the saltwater on your face!) and voila—beautiful smooth skin!

Cover up any cuts.

While the salt in the Dead Sea can certainly help open cuts or sores heal faster, the burning sensation is not an experience you might want to have while you’re trying to float and relax. Be sure to cover up any cuts you have with a band-aid ahead of time for easy floating.

Shaving or waxing will leave your skin sensitive. The same as with open cuts or sores, this will result in an uncomfortable stinging or burning sensation. Avoid shaving a day or two before your planned trip to the Dead Sea.

Dunk your head in.

Unlike ducking your head in a pool or even the ocean, the saline waters of the Dead Sea can cause a really painful burning in your eyes. It’s also not advised as the density of the water can drag your head down. Save the Dead Sea for floating and when it’s time to rinse your face, head for the showers.

Visiting the Dead Sea is a bucket-list adventure that you’ll never forget. If you’re Jewish, between the ages of 18 to 26 and haven’t yet been to Israel, you can apply for a free 10-day trip with Birthright Israel (the Dead Sea is on the itinerary!). Fill out an application today or click here to find out if you’re eligible.

Start Your Interactive Adventure   If you’re looking for a taste of what awaits when you get the chance to visit the holy land on a Taglit-Birthright Israel adventure, take a virtual interactive 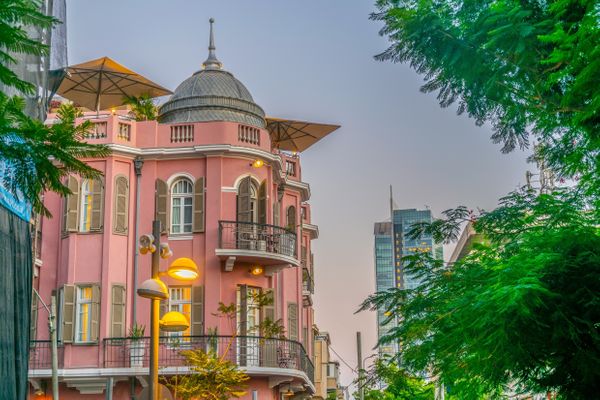 With its sun-soaked beaches, world-famous nightlife, and Middle Eastern vibes, it’s no wonder that Tel Aviv is at the top of everyone’s Israel bucket list. And because there’s so much